The Gastroenterologists at CNOS provide a full spectrum of preventative care, diagnostics, and treatment for your digestive health and gastrointestinal needs. We try to help prevent diseases like liver or colon cancer and help to manage other gastrointestinal conditions such as heartburn, ulcers, diarrhea, IBS, and many more.

From our expert physicians to our friendly office staff, our practice is dedicated to providing you with compassionate care and a satisfying healthcare experience.

CNOS offers consultation and treatment for many gastrointestinal issues that you may be dealing with or have been dealing with for some time. Below you will find additional information on the above conditions. Please call CNOS to schedule an appointment with one of our gastroenterologists to learn more about how their expertise can help you and lead you on a way to a happier, healthier life.

Acid reflux – often called heartburn – occurs when acid from the stomach refluxes (flows back) into the esophagus. This can cause discomfort and may damage the lining of the esophagus. In some cases, chronic acid reflux can lead to scarring and the development of Barrett’s Esophagus, a precancerous condition.  Sometimes patients can have non-erosive reflux disease of which findings at endoscopy appear normal.  This can be further evaluated with a wireless pH probe (BRAVO) which is placed during the endoscopic procedure allowing us to better accurately make a diagnosis.

Having difficulty swallowing is referred to as dysphagia and may be a symptom of GERD, also known as gastroesophageal reflux disease or acid reflux disease. Dysphagia affects your esophagus, the tubular organ that carries food content from your mouth to your stomach. It may cause pain, tightness or a sticky feeling in your throat and chest. Some patients also complain of trouble breathing.

Fatty liver, also known as non-alcoholic fatty liver disease (NAFLD) is a common condition, occurring in 20-40% of the population in Western countries.  It can range from mild benign fatty liver to inflammation and scarring of the liver, occasionally resulting in cirrhosis. The primary risk factors for the disease include obesity, type 2 diabetes, high cholesterol (especially high triglycerides), and family history.  Patients consuming moderate to heavy amounts of alcohol have findings very similar to NAFLD, so patients must stop drinking if the condition is identified.

Celiac disease (gluten allergy) is an immune disorder related to ingestion of gluten that can develop in individuals with certain gene types, and is thought to occur in up to at least 1% of the population.

Celiac disease can be diagnosed with blood tests, but should be confirmed with a biopsy of the small intestine done at the time of an endoscopy.  Food allergy testing for gluten is not as specific as a direct blood test or a biopsy and should be viewed cautiously.  Some patients may have intolerance for gluten-containing products but not actually have celiac disease – your physician can help to distinguish these situations from one another.

Celiac disease is treated by a life-long gluten-free diet.  This is a major lifestyle change for most patients and takes some time to get used to, but the number of available resources for celiac patients has skyrocketed over the last few years.  Consultation with a dietitian may also be helpful.

The colon, or large intestine, is the tube-like organ at the end of the digestive tract. It is lined with muscles that move waste from the small intestine to the rectum, where stool is eliminated. The colon also absorbs fluids and nutrients from digested food. Getting enough fiber, water, and exercise is essential to maintaining a healthy colon and promoting regularity.

A colon polyp is a small clump of cells that forms on the colon. Polyps can be anywhere from pea-size to golf ball-size. While this cell growth is abnormal, polyps are not usually cancerous. However, since a polyp can become cancerous if it is not removed, timely treatment is essential.

Diverticulosis is a condition in which small pouches (diverticula) form on the colon wall and become infected or inflamed. Diverticula are caused by pressure that builds when the colon muscles have to squeeze too hard to expel waste. Symptoms may include bloating, mild cramping, constipation, diarrhea, urgency, or, in rare cases, rectal bleeding. This infection can cause the diverticula to swell or burst and may produce symptoms such as pain, fever, chills, and, in severe cases, infection of the abdominal cavity (peritonitis).

Patients who are diagnosed with colon cancer can expect to receive compassionate, meticulous care at Midlands Clinic. We sometimes use advanced laparoscopic surgery techniques to perform colon cancer surgery. While surgery is usually the most effective way to remove cancerous parts of the colon, treatments such as chemotherapy or radiation may be needed to treat cancer that has spread beyond the colon.

Check out the additional specialties and focuses below. Our diverse team of specialists are well educated on a variety of health issues and conditions. Learn more about the conditions below!

Anemia refers to a lack of healthy red blood cells. Having anemia can make you feel tired and weak. There are many forms of anemia, each with its own cause.

Bleeding from the intestines can occur for many different reasons, and like most conditions can range from very mild to life-threatening.  Passage of red blood usually represents a source in the colon such as diverticulosis, hemorrhoids, colitis or less commonly a large polyp or cancer.  Passage of black tarry stools often represents bleeding from the upper GI tract (esophagus, stomach, or small bowel) such as from an ulcer or liver disease.  Other patients may not pass visible blood but are found to have anemia (low red blood cell counts) on a laboratory test or have a positive test for microscopic amounts of blood in the stool (stool cards).

While many patients with small amounts of intermittent bleeding likely have irritation from hemorrhoids, more serious causes cannot be ruled out without an examination.  Additional risk factors such as use of blood thinners, family history of GI cancers/polyps or colitis may also contribute.  Patients with bleeding or unexplained anemia should ALWAYS be considered for evaluation with colonoscopy and/or endoscopy to try and identify a bleeding source which could possibly be treated during the procedure.

Occasionally the bleeding source is found to be in the small intestine, outside the reach of our scopes.  In this situation, a pill-sized camera called a capsule endoscope can be swallowed and the images transmitted wirelessly to a device the patient wears for viewing by the physician.

Colitis means inflammation of the colon, and may present with abdominal pain, diarrhea and bleeding from the intestines.  This can occur related to infection (such as E. Coli or Salmonella), lack of blood flow (ischemia) or chronic inflammatory conditions.  The appropriate treatment hinges on making a correct diagnosis as early as possible.

An increasingly common form of colitis is called inflammatory bowel disease, generally divided up into Ulcerative colitis and Crohn’s disease.  Ulcerative colitis affects only the colon, while Crohn’s disease can affect any part of the intestinal tract.  These conditions are chronic illnesses which require monitoring and frequently need medications to keep them under control.

Many of the symptoms overlap with conditions like irritable bowel syndrome, and your doctor may need to perform tests to help make the right diagnosis.  These may include blood and stool tests as well as colonoscopy.  The sooner colitis is identified and treated, the better the outcome in most case.

Constipation occurs in a few different ways; the muscle contractions in your intestines may be too slow to push the stool out of your body, or there is not enough water in your stool to soften it so it can move through the intestines. Not being able to go to the bathroom can get very uncomfortable and painful, but that is not the only risk. Constipation can come with other health hazards, such as fecal impaction and hemorrhoids.  It is important to minimize these risks by incorporating these simple ways to beat constipation into your daily lifestyle.

Disease of the Pancreas

The pancreas is located deep in the upper abdomen. It is involved in digestion and produces several hormones that regulate body metabolism, including insulin which controls blood glucose (sugar) levels.

Pancreatitis is an inflammation of the pancreas and is commonly caused by excessive alcohol use or gallstones. Pancreatitis presents with pain which can be quite severe. It is usually treated by resting the pancreas but can be managed with certain procedures.

Normally, ‘accidents’ or fecal leakage should not happen in adults except during episodes of severe diarrhea. People with chronic or recurring fecal incontinence may have few or frequent accidents. The symptoms may range from the inability to hold gas, “silent” leakage of stool during daily activities or exertion, or being unable to reach the toilet in time. Other intestinal symptoms such as diarrhea, constipation and abdominal discomfort may also be present.

Fortunately, effective treatments are available for fecal incontinence. Treatment for fecal incontinence can help improve or restore bowel control. Depending on the cause of your incontinence, treatment may include dietary changes, medications, special exercises that help you better control your bowels, or surgery.  Additionally, there is a specialized procedure of which multiple injections (i.e. Solesta) are done into the rectum that can also improve symptoms.

Hepatitis is an inflammation of the liver.

The causes are numerous. Viral infections such as hepatitis A, B or C may be the cause. Hepatitis A usually resolves by itself, but hepatitis B and C may cause chronic infections leading to progressive liver disease, cirrhosis and liver failure. There are treatments available for hepatitis B and C. Alcohol in large amounts, certain medications or toxins can also cause hepatitis. Inherited conditions may also cause liver disease. One example is a condition that causes the body to absorb too much iron which then accumulates in the liver and damages it. Excessive amounts of copper in the liver can also cause liver disease. Fatty liver is a common cause of hepatitis.

Your primary care doctor can test for liver disease with a simple blood test. If an abnormality is found, a more detailed investigation usually follows.

Its primary symptoms are abdominal pain with associated irregular bowel habits; either diarrhea, constipation or sometimes both. It does not lead to colon cancer or other life-threatening illness, but it can dramatically affect a patient’s quality of life.

No blood test or x-ray study can identify irritable bowel syndrome, but these tests may be used to help rule out other disorders with similar symptoms. Some patients may also require endoscopy or colonoscopy to help make the correct diagnosis.

Treatment of irritable bowel is directed at the patient’s main symptoms with diet and selected medications, as well as focusing on patient education.

Ulcers are sores that can develop on the lining of the esophagus, stomach, or small intestine and can cause pain, nausea, or bleeding.

They may present with upper abdominal pain, nausea and vomiting, anemia or bleeding from the intestines.

Contrary to popular belief, stress is not the cause of most ulcers. The majority of ulcers come from use of aspirin and anti-inflammatory drugs such as ibuprofen and naproxen, or from a bacterial infection called Helicobacter Pylori. Patients on additional blood thinners are at higher risk for bleeding related to ulcers.

Ulcers are best identified during an endoscopy, rarely x-ray tests are capable of finding them as well. They are treated with medications to block acid production to allow them to heal, as well as by addressing any risk factors that may have led to their development. 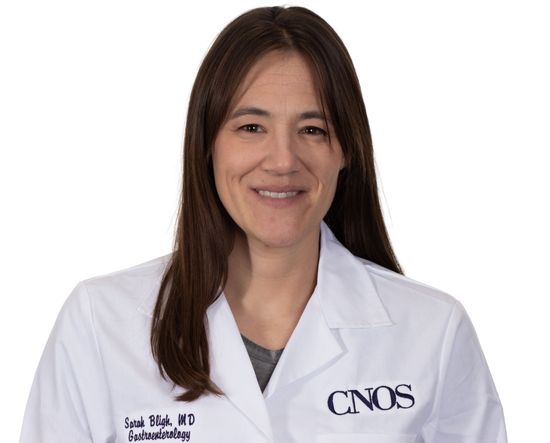 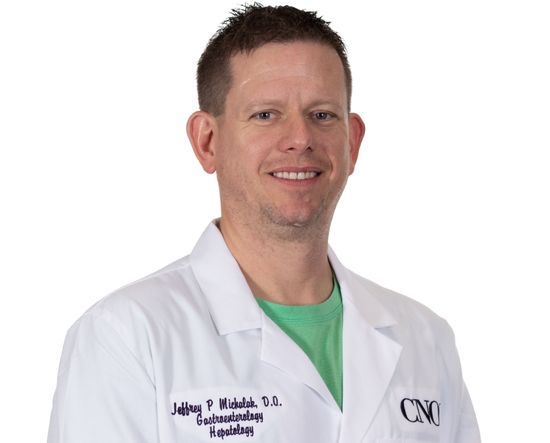 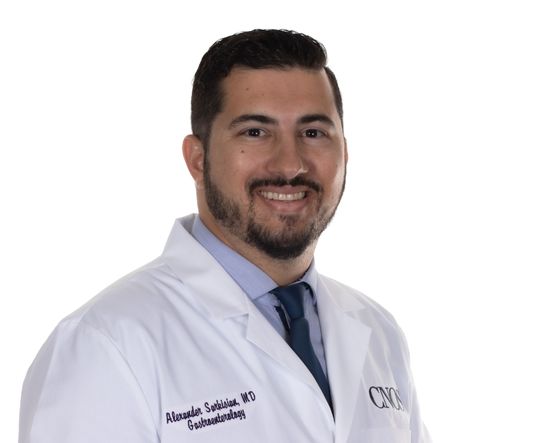 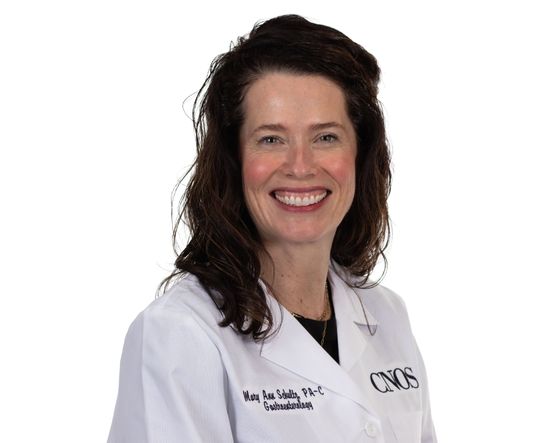 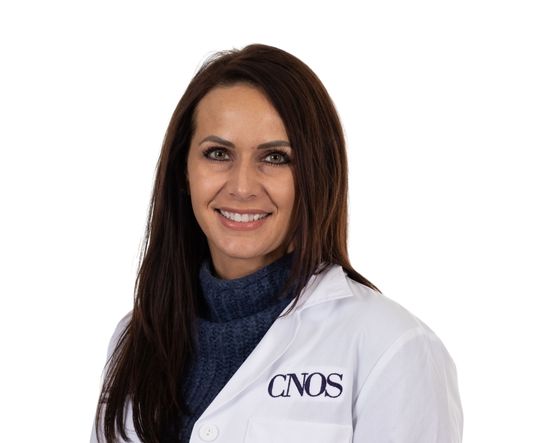 The following CNOS clinics offer gastroenterology care in communities throughout Siouxland. Find a clinic near you to visit with a gastroenterologist.